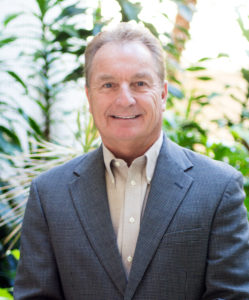 Barney Bailey may be the founder, CEO and President of Entertainment Supply & Technologies – but he prides himself on his humble beginnings as the oldest of four in a military family. At the young age of 15 he began his cinema career working long hours behind the concession stand, in the box office and eventually graduated to the projection booth at a two-plex cinema. At age 21, Barney was hired into the supply and manufacturing side of the industry, and this began his decades-long career providing complete FF&E products and services to his clients.

As part of his work in creating custom entertainment solutions for a range of clientele, he and his veteran management team have opened over 6,500 screens in the domestic and international cinema space.  His work includes engagements with both publicly and privately held clients – from the domestic “Big Ten” exhibitors to independent theatres. He and his team are currently providing customers with advanced technologies and operations support in the new era of upscale dine-in cinema.

Mr. Bailey’s educational background is in the field of economics (he is often consumed with reading about the international and political economy).  He supports several children’s organizations including AMIkids Tampa, Variety The Children’s Charity, Friedreich’s Ataxia Research Alliance, Joshua House and the Redlands Christian Migrant Association. Barney is an avid tennis player – even captain of his recreational tennis team that won the 2014, 2017 and 2018 state championship. Anyone who knows him will vouch that he lives by his self-professed mantra:  Stay focused, have fun, and make friends, personal and professional alike. 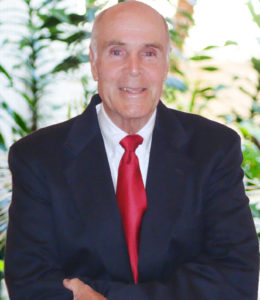 With Walter Beatty, it’s hard to know where to begin, and even more difficult where to end!  Walter entered the cinema industry in 1993 and never looked back.  He works with ES&T clients on a range of products and services, and leads our executive team with his decades of insight and priceless ideas to better serve our clients and partners.

Walter provides executive level marketing and contract diplomacy for both our private and publicly-held clients.  He often serves as Barney’s right hand man, focusing his efforts on sales management, special projects and client communications.  Throughout the year you can find him working the convention and trade show floors, forging new relationships and nurturing the old.

Walter graduated from DePauw University in Greencastle, Indiana with a bachelor’s of science in economics and a minor in mathematics.  He is an active supporter of The Hole in the Wall Gang (don’t ask), and vice president of the Danbury Grassroots Academy.  In his spare time, Walter enjoys outdoor sports, most notably representing the United States in tennis competition versus Canada and South Korea.  In 2014, he won national senior titles in both tennis and platform tennis.

Born in Middletown, Ohio he was most fortunate to marry his childhood girlfriend, Anne Lawson, and together they have two grown boys. Those boys have, in turn, brought to this world four wonderful grandchildren providing great joy and entertainment…pun intended! 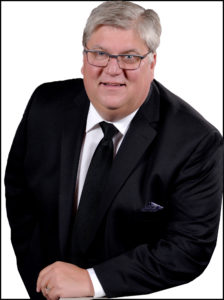 Scott McCallum loves living on the edge… the cutting-edge of technology that is!   Scott’s main focus at ES&T is guiding clients through the current transition to laser projection technology – an element of cinema he has first-hand experience of from his nine years at Christie Digital Systems. He supports theatre owners and managers with his invaluable insight and expertise as they renovate, expand and modernize their existing cinema space. Scott is also no stranger to the intricacies of premium screen and immersive sound systems, and assists ES&T clients as they navigate the ever-changing elements of these technologies.

Prior to joining ES&T, Scott served on several international digital cinema panels – including InterBEE, BIRTV, Shanghai International Film Festival and the Cannes Film Festival – where he educated the industry during the digital transition with side by side exhibitions of film and the new digital servers and projectors. As International Sales Vice President for QuVIS, McCallum worked with global movie studios to develop the 4K post-production servers which are now commonplace in the industry. Scott’s distinguished career in technology development also includes time spent as a sales executive with New Tech and also VTel, a video-conferencing solutions company.

As a highly-skilled amateur craftsman, McCallum hand-carves custom cutting boards for several charitable donations to auction in support of their causes. 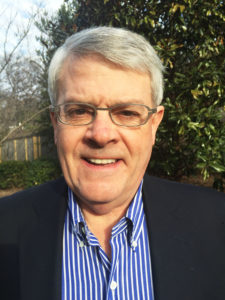 Richard Pickett dives right into the action everyday for ES&T!  He is our man on the scene making sure all of the front-end systems and wall draperies are installed professionally, correctly and with a smile (his own, usually). Richard is the one on the executive team who’s mission is ensuring client satisfaction and retention.

Like Barney, Richard had humble beginnings, working in the family business after college selling and installing school stage curtains.  He learned the industry from the ground up by working for tens of cinema chains and supply companies, conducting customer relations and forming lasting relationships.  It’s no surprise that Richard is well-traveled – he even spent ten years in Japan from 1995-2005 working with Virgin Cinemas and Shochiku Company, among others.

Born and raised in Jackson, Mississippi, he earned a Bachelor’s of Arts degree in business administration from the University of Mississippi.  Being on the road a majority of the year he is able to escape the office team rivalry… but go Ole Miss! 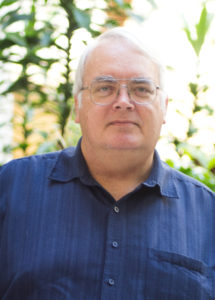 Bruce Schneiter is a long-time veteran in the theatre industry – 38 years and counting!  He worked in every nook and cranny of the business, literally, before joining the ES&T team to spearhead our technical and cinema engineering services.

He spent his early career as a facilities manager and technician for AMC Theatres, where he maintained technical operations from the dark corners of the projection booths.  Upon seeing the light, he transitioned into project management for AMC, where he worked for 22 years coordinating the major chain’s new construction projects.

As Senior Vice President of Technical Services, he is the man with the plans – making sure the design for every project is exactly as it should be.  Bruce holds a Bachelor’s of Science degree in business management with a minor in marketing from the University of Florida.  He can often be found rooting on the Gators in his spare time (don’t hold it against them). 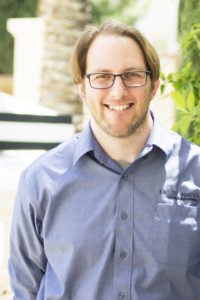 ES&T brought Josh over from the dark side – literally. Prior to joining the team, he served as Chief Projectionist for Tampa’s Museum of Science and Industry. Prior to his time at MOSI, Josh worked as the Projection Manager for the Channelside Cinemas IMAX theatre, and many years back served as an assistant manager for Regal Entertainment Group.

To say Josh is ES&T’s accounts manager is to put it lightly. He’s the guy who will fly up to the Midwest – in the dead of winter no less – to guarantee new construction and remodel project deliveries are received on time, and installations exceed expectations. He collaborates with all members of the ES&T team – in the office and with our technicians and project managers on the scene – to bring state-of-the-art front end solutions and concession design to our clients.

And while it has absolutely nothing to do with cinema, we’d like to mention that Josh graduated from the University of South Florida with a Bachelor’s of Arts degree in literature. He is often persuaded to lend an eye to ES&T’s marketing materials, as he will surely tell you if your grammar or punctuation is lacking. Josh counts his lucky stars his alma mater is USF, so as to stay out of the college rivalry crosshairs between Bruce and Christina. 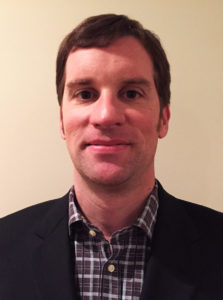 If you need cinema installation services and conclusive oversight, Greg Schick is the one to get! In his early career, Greg worked the sales end of business with a focus on customer retention. Not long into his career, he transitioned into theatre and stage supply, moving forward to specialize in the sale and installation of stage curtains and equipment (he may have learned a thing or two from Richard Pickett).

Working from coast to coast, Greg has equipped thousands of venues with state-of-the-art entertainment solutions. While cinema is his main focus, Greg also serves clients in schools, churches and performing arts venues. Greg holds a Bachelor’s of Arts degree in communications from the University of Tennessee, and thankfully his team does not rival Ole Miss, because he and Richard often find themselves working together in the same room. 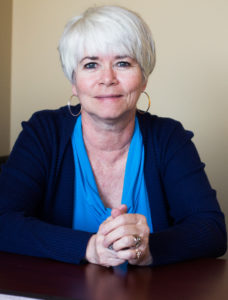 To say Dixie manages ES&T customer service is offering her skill set a disservice.  Mrs. Misemer has been the rock of the sales department since its inception, and has carried out every customer service task that exists in the span of her twenty year career.  She’s supervised order entry, served as an administrative assistant, managed the office, managed new cinema projects, coordinated logistics, hired employees, fired employees and disciplined employees (Mr. Bailey, mostly).

While she can handle all of the above with poise and grace on any given day, Dixie’s main focus is assisting our clients with their new project shipments, supply requests and overseeing all order processing.  If you can ask it, Dixie can answer it, and if you need it, she will find it.  She claims to truly love coming to work every day. Whether or not the former is true, it’s clear to everyone here that she puts her customer’s happiness above all else. 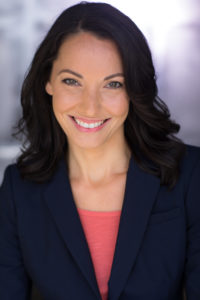 Christina Woodlief is the resident jill-of-all-trades.   She serves our clients in a variety of ways on a daily basis –  from coordinating supply needs to nurturing industry relationships.  Having worked tirelessly in the broadcast news industry in her early career, Christina provides the executive team with design and online content creation support.  But that’s not why she’s really here…

Christina graduated at the top of her class from the Culinary Institute of America in Hyde Park, New York, and serves ES&T best by lending her service industry insight to our dine-in cinema and hospitality projects.  She’s worked countless 12-hour days in every end of the restaurant business, including the kitchen at Thomas Keller’s Michelin-star Bouchon Bistro in California’s Napa Valley.  She continues to serve private clients with custom meal planning and small-batch catering.

Before all of the above, Christina attended Florida State University earning a Bachelor’s of Science in media studies with a minor in business management.  On autumn weekends she cheers on her Seminole football team, much to the dismay of Bruce.